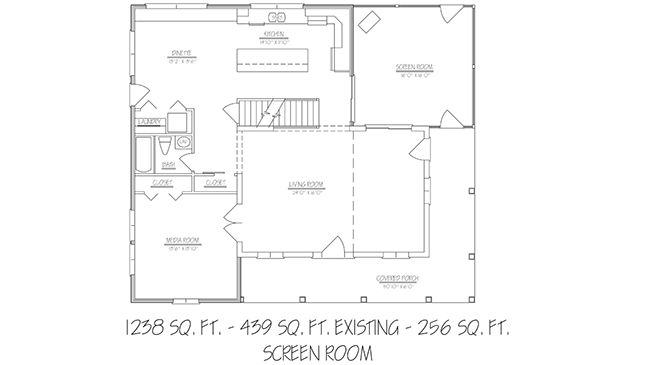 During the renovation of Orchard Hill Farm, Christine Bridger encountered more than a few not-so-pleasant surprises, especially because the family chose to save the original dilapidated 20th-century farmhouse. Not surprisingly, the main challenges stemmed from the original parts of the home.

At its foundation, their home has a “Michigan Basement,” which is a crawlspace excavated to the depth of a basement. The Bridgers had not planned for the dehumidifiers, sump pumps and drain tiles to fix moisture problems from an exposed earthen floor. They also had not planned for a brand new $20,000 septic system because the original passed inspection.

“We didn’t want the extra expense,” she says. “But then you realize, ‘Oh my gosh we could only take two showers and do two loads of laundry and sewage was coming up around the walkway.”

With raw sewage bubbling up from the walkway, the Bridgers had no choice. Was it as easy as dropping in a new tank where the original was? Of course not. The ground is solid clay so special equipment was required to bury the new system, nearly doubling the expense.

The yard had grown up with weeds and trees and had to be regraded because of sink holes. When it came time to install grass, Christine originally thought she could get away with three fancy, semi-robotic water sprinklers. She went to turn them on, expecting powerful geysers, but was disappointed by three flighty trickles. For a verdant lawn, she would have to install 36 sprinkler heads—a luxury she doesn’t even have in her Chicago home.

Always looking at the bright side, however, the sprinklers have done more for the family than green grass.

“The silver lining is that now there are 36 sprinkler heads that our kids can run around in which are in front of an apple orchard,” Christine says.

When it comes to overcoming the unexpected and often stressful challenges of renovation, her advice is to rationalize and focus on the positive. Deal with only one issue at a time and prioritize the issues that are most important. When Christine encounters a challenge, first she determines if the issue is something to be fixed immediately, later down the road or is so distressing the best course of action is to pretend it didn’t happen.

This category of challenges, she says, “will make me so upset, we can’t talk about it for 30 days. By then, I am really good at justifying and finding the silver lining,” which is what happened with the sprinkler system.

Her advice to other people considering a similar renovation is to be educated and understand the fundamentals to prepare for the unexpected—even sewage-y—crises. It’s important to understand the logistics and the project as a financial investment before gushing about a wrap around porch.

Also, she says, it’s better to course correct when you do encounter an issue because it will haunt you in the future. Although you may save $100 by not adding two more can lights, you’ll think about it every time you walk into the room, turn on the lights and grumble about how dark it is.

“Even worse, if your husband is the one who said you should put the can lights in,” she says. “Every time you turn them on, he says ‘I told you so.'”