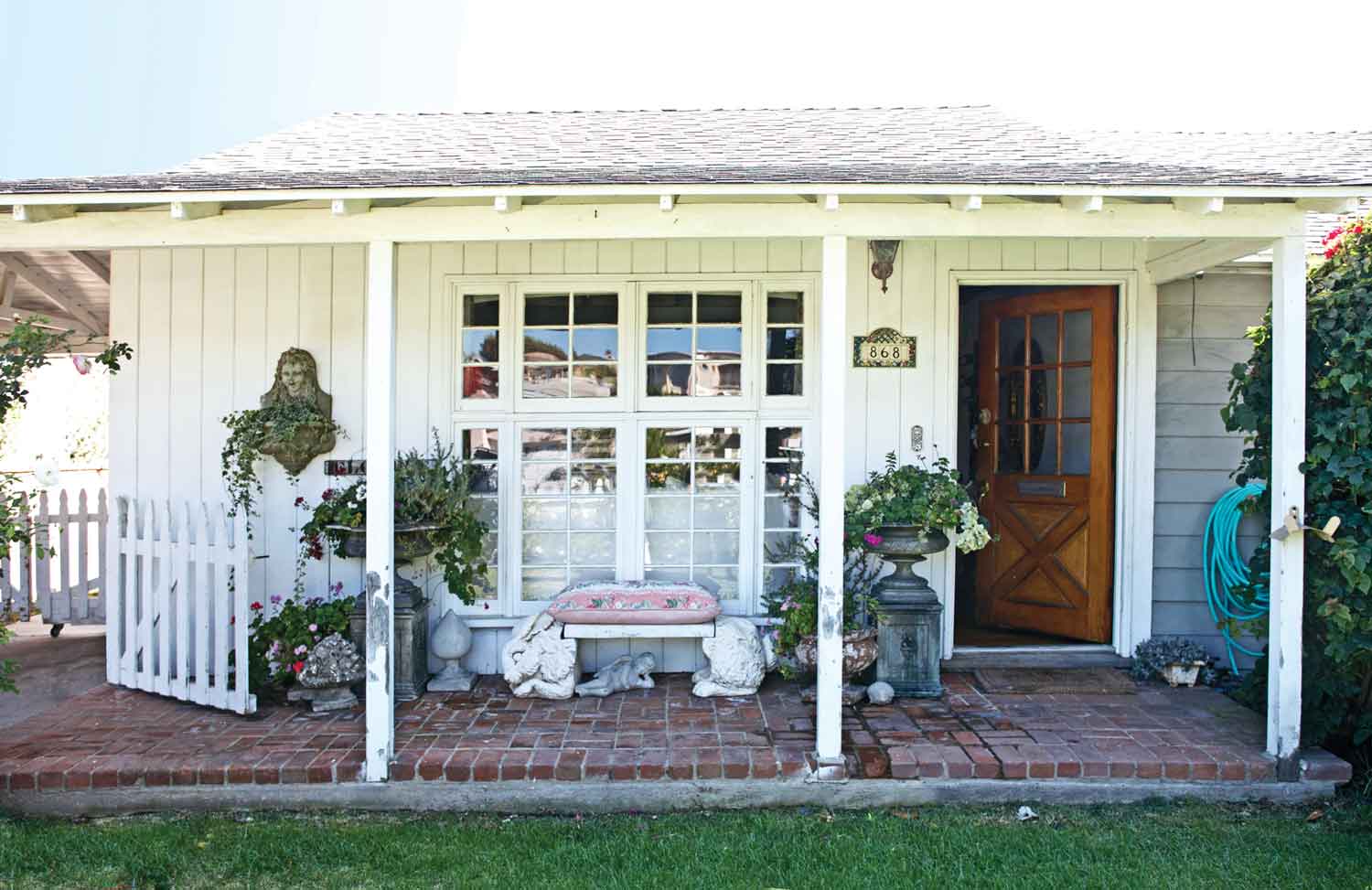 House Tour: How To Design With Purpose

Peeking out from behind ivy, Sally McNellis’ bungalow is a reminder of long-lost, simple country living. Complete with a white picket fence and emerald green lawn, it looks as though it was plucked right from a 19th-century pastoral painting.

Stepping into the home you are greeted with a plush white couch and a stately mahogany armoire. Looking around the living room it is easy to guess her philosophy on decorating. Sally believes that a home is all about being “comfortable and relaxed.”

Her sofa is oversized and inviting, and careful attention is paid to the scale and size of the elements. This is a home where it’s easy to move around and even easier to curl up and get cozy.

When she is on the lookout for antiques she keeps her eyes peeled for pieces that are usable. She also keeps in mind, her son Willie. Because she has an active 6-year-old, her theory is that everything in a home must be useful, and in her case, kid-friendly as well. Many items are slipcovered for ease of care. The coffee table is also a plush ottoman, easy for Willie to tumble around.

Sally chooses accessories that are both quaint and whimsical; she creates spaces that are sophisticated enough for an adult and yet creative to inspire her son’s imagination.

With fresh blooms dotting tabletops and many surfaces Sally’s love of flowers is apparent. Her father, an award-winning horticulturist in England, where she grew up, impressed upon her at an early age an appreciation for flowers.

No room is complete without a small bouquet of striking blooms. If there are no live flowers to be found, anything from the dishes at the dining room table to the throw pillows on the couch tout impressive floral patterns of their own.

Sally believes in using neutral colors like white on larger pieces in a room and adding color with accessories everywhere else: “I love white because you can change the look and mood of the room with color for the different seasons.” A perfect example of this is the stunning piece on top of the window in her living room that she found at a flea market. After painting it white and distressing it, the salvaged remnant became an elegant architectural statement.

Sally first started collecting antiques during her training at cooking school in France. “The first piece I ever bought was the buffet that I have in the living room,” she says. Her prized buffet followed her once she made her move to the U.S. 25 years ago.

Her collecting passion grew as she attained piece after piece. Her eye for quality and detail afforded her cheap finds that she would take home and refurbish with paint treatments and ornamental additions. Her skill in this grew too, and not long after befriending another avid antiques hunter, John Condell, the two went into partnership to open The Bungalow, an antiques shop in Laguna Beach, California. These days, the inventory at her shop and the furniture in her home are seemingly interchangeable; her signature look of worn yet refined pieces is at home both at her house and in the store.

These days, the inventory at her shop and the furniture in her home are seemingly interchangeable; her signature look of worn yet refined pieces is at home both at her house and in the store.

This style of cottage sophistication is most evident in her bedroom. Pastoral porcelain figures on the windowsill reflect her English background and add individuality to the room.

To Sally, they are a lively touch and also pieces of art. “I think that art gives a room personality on top of adding color,” she says. The room is also a testament to her use of bright floral fabrics juxtaposed against neutral white. Rich patterns are balanced by walls that act to break up the space, and create harmony and a sense of calm. Not to be forgotten, however, is the dainty chandelier hanging from the center of the ceiling. The ornate fixture is beautifully crafted and is the central light fixture in the room, in keeping with her motto of form following function.

Not to be forgotten, however, is the dainty chandelier hanging from the center of the ceiling. The ornate fixture is beautifully crafted and is the central light fixture in the room, in keeping with her motto of form following function.

Out in the backyard, Sally has created a small oasis where she can escape the fast-paced environment of her store and slow down. “Life moves so fast,” she says. “It’s hard sometimes to slow down.”

The area she has created is set off from the rest of the backyard under a covered patio surrounded by white curtains. The backyard is not only lush, it is also practical, like everything else in her house. Frequently used as a dining room on a breezy summer evening, it is complete with an ornate chandelier that hangs down over the wrought-iron table and matching chairs. A set of white plastic flamingos add a touch of playfulness to the greenery bordering the space. Enclosed by four ivy-covered walls, the backyard is a dream escape.

Sally’s design philosophy is that life should be hassle-free. Nothing in her home is plain, nor is anything too cluttered. Practicality, comfort and color are her criteria for furnishings.