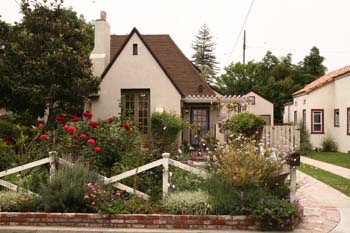 “I love taking something that needs love and making it wonderful,” Kara Kosinski says. “And my house needed lots of love. It was like a diamond in the rough that needed someone to dust it off.”

Kosinski saw beyond the exterior’s peeling paint and backyard’s chain-link fence, and fell in love with the home’s good bones and original architectural elements, including stepped archways that frame the entrance to its rooms.

“The minute I saw it, I knew it was home,” she says. “The moldings, the glass door knobs, the little pocket windows and the weights in the wood-framed windows were all still there.”

Since she bought it in 2000, she has polished and re-polished the 1922 English Tudor Revival cottage so that it shines like a precious gem that fits in its sterling setting, centered in a neighborhood of other historic buildings that date to the 1880s. Her work has paid off: Kosinski’s cottage and guest room/garage won the local preservation group’s Neighborhood Beautification Award.

Fortunately, the infrastructure had been updated by a previous owner, so Kosinski—who shares the home with her sister, Molly Kosinski, two Rhodesian Ridgebacks named Lena and Ginger, and a perky boxer who answers to Mister—has concentrated on what she really loves, which is decorating and gardening.

“I work all week, and I garden all weekend,” says Kara, who is the senior director of product development for a large footwear company. “I love to dig into the dirt; it’s like therapy. I’ve found all kinds of souvenirs in the yard—horseshoes from the 1920s, pieces of antique china and even a cluster of shells with fossils.”

The interior, too, was a labor of love. She made every room in the single-story, two-bedroom house cozy with a variety of furnishings. Some, like the round mirror over the living room fireplace, are from her family, and some, including the what-not shelf in the kitchen, are new. Others, notably the furniture in her sister’s bedroom, were bought at auction. “Molly bought it because it was similar to my grandmother’s furniture,” Kara says.

Sometimes, pieces simply fell into her hands. Her kitchen table and bench were rescued from becoming tomorrow’s landfill and were in such good condition that she didn’t have to repaint them. The 1920s bedroom dresser, which Kara refinished, was bought for $40 at a garage sale. Her mother made all the curtains and draperies.

“My goal was to keep the house looking historic in the era of the 1920s but to update it while keeping the style,” Kara says. In the kitchen, for instance, Kara kept the c. 1970s cabinets but painted them white to lighten the look. She also added a farmhouse sink; new appliances, including a double oven; granite countertops and a butcher-block island.

Molly and Kara felt there was only one thing missing: There was no extra space in the 1,150-square-foot cottage for guests to sleep over. “We have a large family, so our nieces and nephews are always over,” Kara says.

So Kara hired architect Carol Tink-Fox, owner of Orange, California-based Stratos Form, and general contractor Scot Lewis, sole proprietor of Lewis Construction Co., to modify the stand-alone garage and add a 15- by 15-foot guest room to it while maintaining the vintage style that would pass muster with the city’s historic district.

“The house has several incredibly steep roof lines, which presented its greatest charm and challenges,” Tink-Fox says. “We had to pick from three roof pitches and come up with a plan that complemented this charming house without upstaging it.”

The original one-car garage, which was nothing more than a simple stucco box, got a new roofline that complements that of the main house and was enlarged by three feet to accommodate a laundry room.

“The design is good because it looks like the garage and guest room belong to the house,” Lewis says. “When you are standing in the drive, the garage looks new yet old, just as it should.”

The project was so successful architecturally and artistically that Kara decided to park the car outside and use the garage space as a crafts and gardening room. The guest room includes a spa-style bath that blends the old and new. The Jacuzzi may say 21st-century, but the white subway tiles remind that the past is ever-present.

“The guest room is designed to feel like a garden room,” Kara says. “The large glass doors lead to the patio, where we have breakfast and coffee.” An open breezeway and pergola that looks as though it has been there nearly a century connects the house and guest room, whose brick floor matches the adjoining patio.

The renovation is the pièce de résistance for Kara and Molly. “We love being in the guest room. The dogs like to run in the backyard then settle down with us in the evening to watch TV.” Kara and Molly—as well as Lena, Ginger and Mister—are happy to call their Roaring Twenties cottage home sweet home.

“The house is not too big, it’s not overdone and it’s just the right size for us,” Kara says. “And all of our guests tell us that it’s comfortable and inviting.”

House Tour: How To Design With Purpose