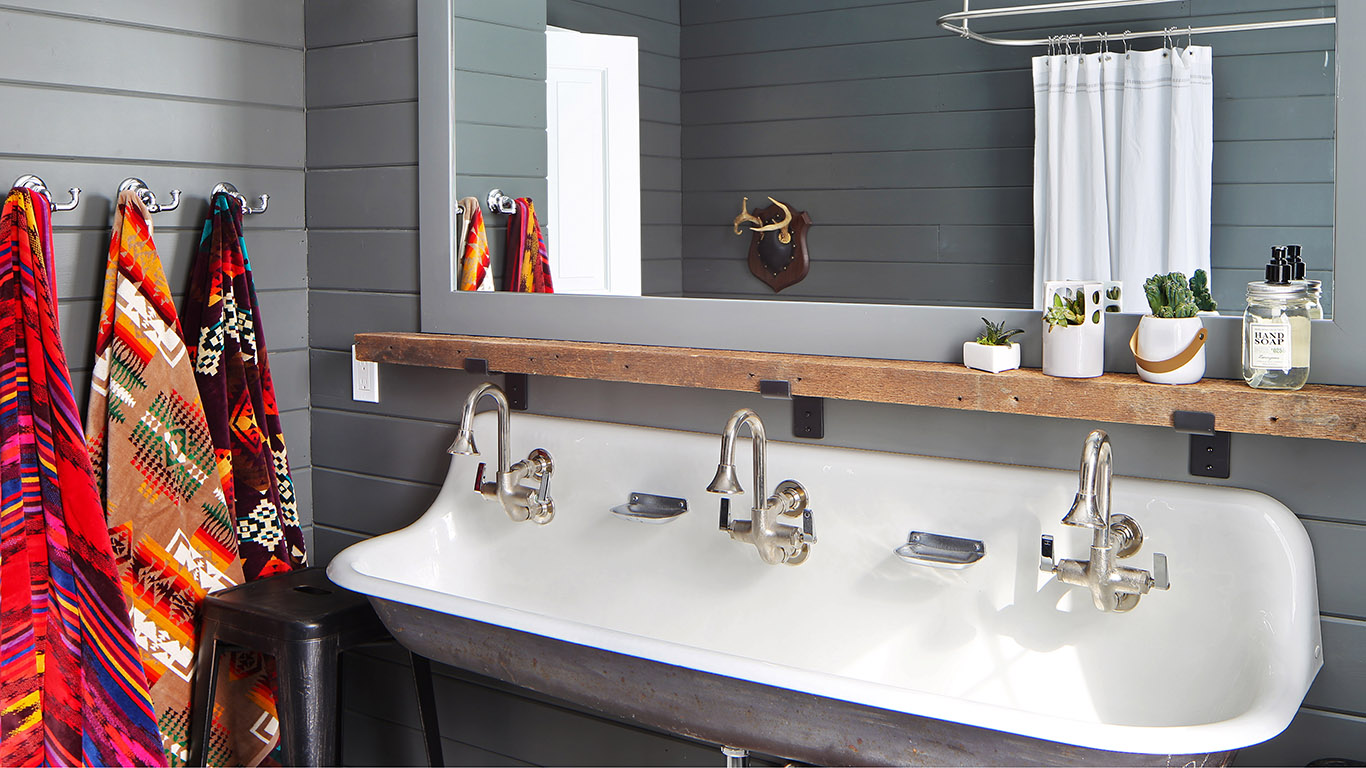 We’ve been following Christine and Gabe Bridger and their family in their renovation of a 1910 Michigan farmhouse. After poring over images and floor plans, and taking walks around the property with Jon Faris of Paradigm Renovation—parts of the process you can catch up on at cottagesandbungalows.com—the Bridgers tackled the home’s bathrooms.

And it’s time for us to bring you the nitty gritty of that adventure.

While Christine and Gabe strive for period appropriateness, when it came to the bathrooms, they wanted to use the opportunity to add some contrast. “What we wanted to do,” Christine says, “is have the bathrooms be the opposite of the rest of the home.” Whereas the rest of the home is predominantly white (a period authentic choice) with touches of black and red, the bathrooms flip the emphasis, with a black base punctuated by accents of white and restrained pops of red.

The downstairs bathroom is fairly small (about 5 x 7 feet), but the ceilings are 9 feet high. Black hexagonal tiles on the floor lead into pencil strips of black subway tile on the walls. Upstairs, a claw-foot vintage-style Kohler tub is black on the outside and white on the inside. While this inverted color scheme and what Christine calls a “nod from simplistic, minimal industrial” style make the bathroom a bit different from the rest of the home,

Christine and Gabe are still careful to keep the overall feel cohesive. They incorporated wood from an original floor joist into the weathered shelf in the upstairs bathroom.

Upstairs, the bathroom is part of the addition, but they continued the feel of the original home by installing shiplap with cedar plank tongue-and-groove boards from Lowes. They also commissioned a custom-made screen to look like a salvaged shop window, which will tie in with a salvaged picture window in the kitchen. Christine also customized caddies to look old by blasting them with a hand sander.

Historic homes are reflections of their era, which is of course part of their charm, but floor-plan issues can also quickly arise. In the early 1900s, when the farmhouse was built, bathrooms were viewed as only functional spaces and consequently ran small. While the Bridgers could not salvage the original bathroom, the downstairs bathroom is the same size as the original at 5 x 7 feet.

The original bathroom had suffered a bad remodel in the 1980s, which removed everything but a door. The Bridgers were able to use that door for a linen closet adjoining the bathroom. Working within the period-appropriate space was “a jigsaw puzzle,” Christine says. In fact, originally she intended the claw-foot tub for the downstairs bathroom, not taking into account its slanted edge. Once the tub arrived, it overwhelmed the space. Fortunately they could use it in the upstairs bathroom.

Upstairs there are three bedrooms and only one bathroom. Since the whole family would be using the upstairs bathroom for brushing their teeth at night, “We wanted it to be as communal as possible,” Christine says. A large utility sink serves just that purpose. To compensate for the lack of counter space, they were able to use a weathered piece of wood from the original home and had it custom made into a shelf mounted on 3-inch iron brackets. Kitchen barstools on either side provide additional surface area to use in lieu of a counter.

In a functional space like a bathroom, it can be hard to find salvage items up to the task of daily use for something like a tub. When you shop secondhand, “sometimes you run out of time because the nature of it is so one-off,” Christine says. Or, she relates, sometimes the cost of getting a salvaged find like a vintage tub is more than if you bought new. New, however, can still maintain a vintage feel. Kohler’s heritage line claw-foot tub, for instance, feels appropriate to the home’s era and the overall authenticity of the home.

“Even with new items,” Christine says, “we wanted to make sure they felt like they could have been in the home from the beginning.” Christine and Gabe’s sense of what suits the home’s era comes from their research visiting historic homes and pubs in their area. In the downstairs bathroom, for instance, Christine describes that the black sink cabinet has “a modern feel but still with old charm,” like the spindled legs.

When it comes to lighting, Christine has layered in fixtures reminiscent of the period, but the technology is very much modern. Christine chose Philips Vintage LED A19 light bulbs, which look vintage but can be controlled from a smartphone. Since the lights are open and you can see the bulbs prominently, Christine says, “it was important to have a vintage feel.”

Learn from the Bridgers’ experience before you dive into your own bathroom project.