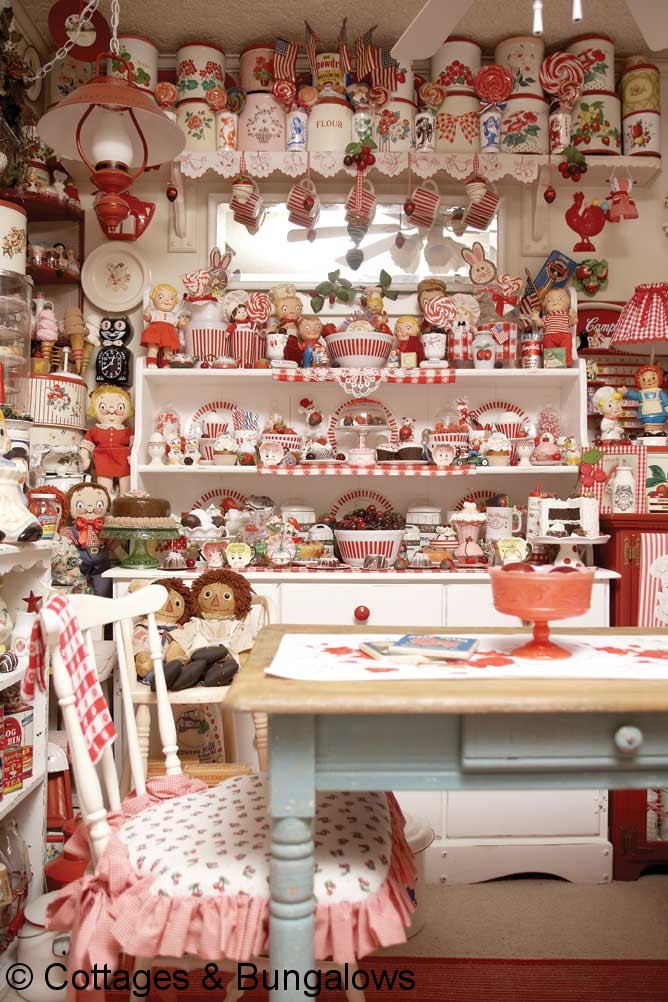 Many of Adrienne and Ron’s collections are gathered from shared memories of playing with similar toys during their childhood. Though her mother loathed anything old, Adrienne has a love for the past.

“I have always wanted a connection with the past,” Adrienne says. “I look at old dishes, dolls, books and linens and wonder where they have been, who owned them. Starting in the early ’70s, I created my own history through other people’s cast-off treasures.”

Among Adrienne’s favorite pieces is a set of Raggedy Ron and Raggedy Adrienne dolls her mother made for the couple shortly after their wedding. Adrienne has cherished such dolls since she was a child, and she began to add Raggedy Andy to her collection when she got married several years ago so her husband would not be excluded from the fun.

Adrienne and Ron now own about 100 Raggedy dolls in all sizes. They don’t have enough space to display the whole collection so they rotate the dolls with the seasons, including their set of Raggedy nutcrackers that make their appearance at Christmas time.

It’s a technique owed to her mother, who lived through the Depression and changed everything, from furniture to accessories, every time they moved. Since the Caldwells live in a space-challenged home, there is limited room to display all the collections, so Adrienne has composed creative ways to showcase her pieces.

Aside from her vast collection of Raggedys, Adrienne also has an extensive collection of dolls, mostly Nancy Ann Storybook dolls. As a child in the 1940s, she was given one as a gift but had to give it away when she was 9 years old when her family moved from the East Coast to California. Nineteen years ago, Adrienne and Ron were perusing an antiques store and discovered one of the dolls, Saturday’s Child.

Since they were both born on a Saturday, Ron encouraged Adrienne to purchase the doll. That was the beginning of her collection, which is now displayed in a glass-fronted cabinet, among 114 other original Nancy Ann dolls. Rummaging through antiques stores and flea markets for collectibles throughout the country and Europe is a favorite activity.

“Whether we are on vacation or just out during the weekend, we are looking with something in mind,” Adrienne says. “The hunt is half the fun.” Some of her favorite finds came from hunting through her uncle’s basement in a 250-year-old barn in Pennsylvania.

“He was using a prized cookie jar to drain oil from his car,” she says. “It is now on display in my kitchen.” Also, many friends and family have donated to the Raggedy Ann and Andy collection over the years.

However they acquire their treasures, one thing is certain: Space is limited and some things have to go. But how can anyone part with such prized possessions?

Adrienne and Ron came up with the perfect solution for that, too. They started a business called Raggedy A’s Attic, which is operated within Lomita Country Antiques, an antiques mall in Lomita, California. When their tastes change or they just have too much to store, instead of purging their pieces they offer it for sale, where someone may love it as much as they did.

“We have met the most special people in this type of business,” Adrienne says. No matter how many items they sell or obtain, there is always room for one more. Figures can be rearranged, dolls can be scooted over and pots can be turned into chairs. If there is one underlying theme to Adrienne’s eclectic display of “structured chaos” it’s this: Live with what you love. “If I love it, I buy it,” Adrienne says. “If something moves me, I can always find a place for it.”

Make an Entrance with these Fall Doorway Ideas

How to Achieve Gardening Zen