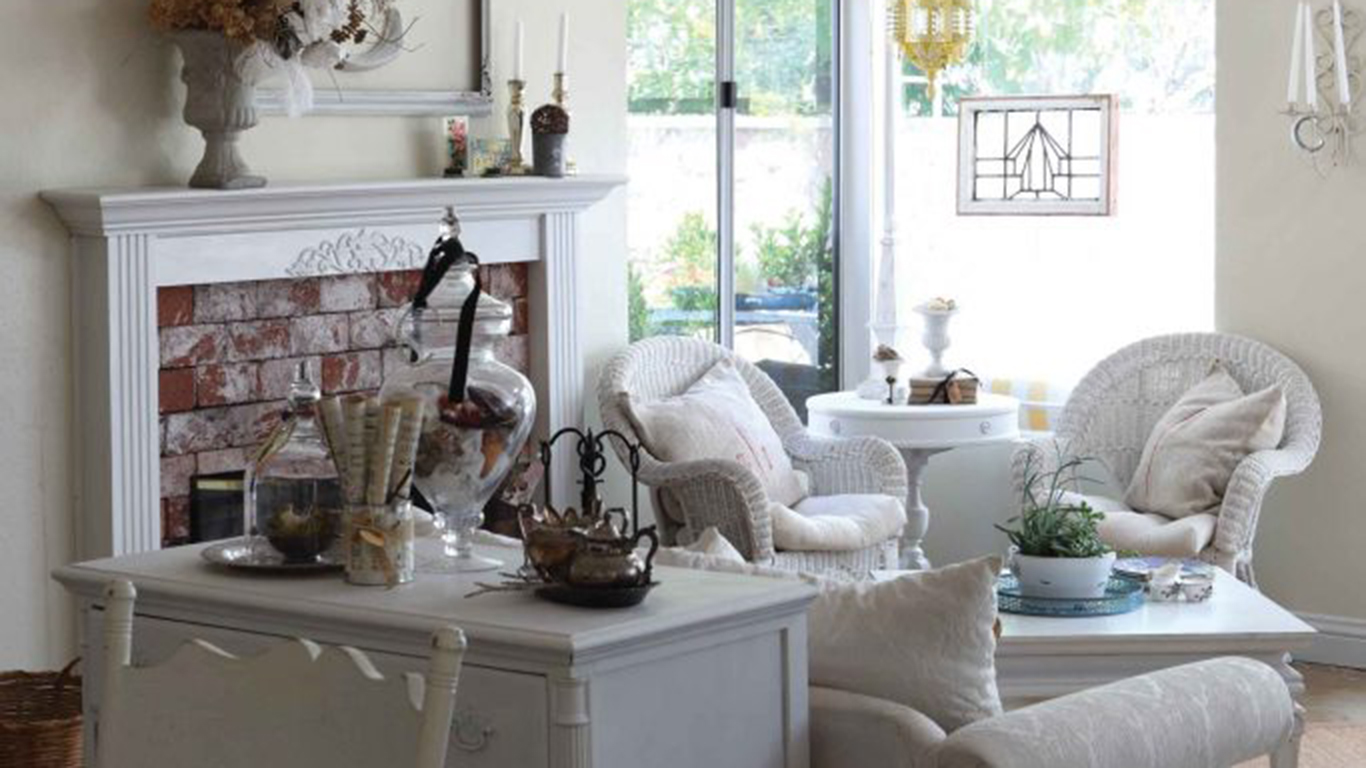 Marcela Cavaglieri didn’t learn from her mother or her decorating magazines the joys of shabby country furniture. She just likes old stuff. It’s a declaration her young daughter is versed in explaining, and Marcela often tells the story of the time when her daughter brought a friend over after school and gave fair warning about what lay inside their neat suburban home in the pristine streets of San Clemente, California. “Just so you know,” her daughter explained to her young friend before opening the front door, “We’re not poor; my mom just likes old stuff.”

“Just so you know,” her daughter explained to her young friend before opening the front door, “We’re not poor; my mom just likes old stuff.”

Marcela amped up the architectural dimension to the room by replacing the pink marble fireplace façade with brick, embellishing the mantel with carvings and placing eye-catching elements higher in the room such as the chandelier in the corner and the stained glass panel in front of one window.

Originally from Argentina, Marcela moved to the United States with her sister, Clara, 20 years ago. “When we left Argentina, no one there knew anything about old vintage style and antiques,” she says. “Our parents were not into old items either—back then, people wanted nothing to do with beat up things.”

However, young and broke, the two sisters turned to vintage items and street-side cast-offs because it was the best way for them to furnish their home. “We came from nothing and we had to furnish a house,” she says. “We learned of garage sales and we were blown away with the kinds of amazing things we saw on the street on trash day.”

They would refurbish and repaint their finds, making items that were more than presentable; they were impressive and charming. “People would come over and compliment our things, and we began to learn that this type of thing existed. We went to our first antiques markets and we learned that there was a name for what we do,” she says.

Soon, the two sisters, encouraged by their friends and motivated by the passion they had developed for finding and transforming antique and vintage items, struck out to forge their own business finding and selling their updated creations in their own stall in an antiques market. After 10 years as a dealer—the last six of them running her own storefront, Nice and Easy Antiques, with her sister—Marcela has stayed true to her original cottage aesthetic, even in her own home.

The kitchen boasts windows with a view of the backyard. For added interest, Marcela added wood appliques to the cabinets and iron corbels under the units.

Outside, her house blends in with the rest of the tract homes on her block; however, inside, the decor is anything but mass produced. Her furniture is a collection of her favorite salvaged creations, many of which are among the first pieces she remade 20 years ago when she began building her home in America.

“When I buy a piece and I bring it home I have it for a long time,” she says. “Actually, one of the reasons I bought this house is because it was one of the only houses we looked at that could fit my farm table.” Marcela is an oddity in an industry where dealers swap out their furnishings as often as they find new ones on the hunt. “For me, everything that comes into the house comes in because I just cannot part with it.”

The decor is a soothing mix of white, ethereal blues and soft yellow, a testament to her sunny personality and her proclivity for the California weather. “My decor is very clean and fresh,” she says. “It goes with our locale; it’s very happy. Even if the weather is very gray, inside everything is bright and cheerful. I like that it’s always summer at my house.”

Her creativity is everywhere, from the vintage sheet music that forms a vignette on a bookcase to the unexpected architectural flourishes placed to create interest. Many of the furnishings are repainted and transformed, though she prefers to keep an original finish if it’s still functional. She’s masked the cookie-cutter bones of her house with structural details that transform the space with a few shabby vintage touches.

Painted white brick conceals plain walls and facings, ornamental corbels add dimension to the architecture, and by stripping the carpet down to the concrete floors beneath, Marcela has created a unique artsy space. The floor plan was also opened up by tearing down a few walls to allow light from the bank of windows facing the garden to reach the kitchen for a bright, airy feel.

Everything from the ceiling to the floors is designed for casual livability, and Marcela is quick to note that her old cottage furnishings are expected to stand up to her children’s scuffed soccer balls and heavy schoolbooks.

“I like a relaxing environment—I don’t care if the furniture gets scratched; every piece of furniture we have we use,” she says. “When our kids were very little, the cottage look was perfect. A lot of people worry about all the white, but I think that it is quite the opposite—if the table gets scratched, it fits right in, or if the sofa gets marked, you can just wash the slipcover.”

In the winter, the home is transformed with the same unfussy and simple approach. Even though she fits three Christmas trees into her holiday decor scheme, Marcela is more likely to incorporate natural wintry elements and a few vintage holiday adornments than go all out with a Christmas wonderland.

Though she confesses, if she likes a vignette enough, even though it’s seasonal, because it’s vintage it may stay up all year. “I have a big collection of vintage ornaments I began collecting three or four years ago,” she says. “I bought a lot of them in pinks and blues, put them in big dishes, and the first year I did it I left it all year long.”

In the master bedroom, Marcela used an antique Victorian full bed’s footboard as a headboard for her queen bed. The nightstand and mirror were finds that she picked from the trash and refurbished.

Just as when she began two decades ago, Marcela’s approach to building the perfect cottage home is based on supplying an innate love of reviving old things and crafting a home for her family to live casually and comfortably. “My house is a place to relax and be casual,” she says. “It just so happens you can do it surrounded by beautiful cottage style.”

Roots of Restoration: A Home That Stays True to Heritage