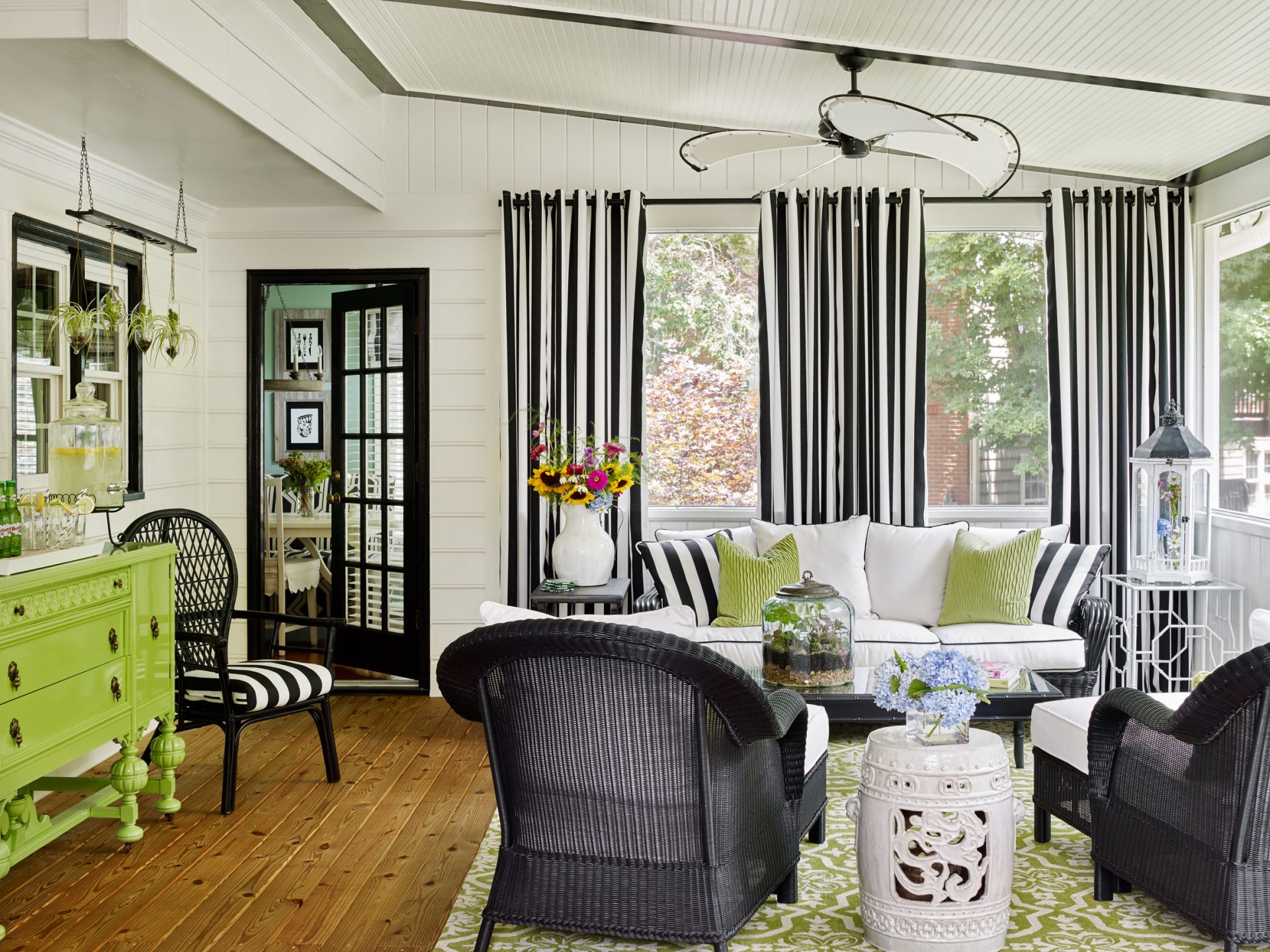 This Screened-In Porch is the Entertaining Space of Your Dreams

Imagine relaxing in a room that was built in your backyard—instead of just looking out at it through a window. Interior designer Joann Kandrac recently created such a room in her home with her screened-in porch, and she decorated it with the same attention to detail as she did her indoor rooms.

Joann and her husband, Drew, live in a traditional two-story house in Acworth, Georgia, a suburb north of Atlanta. Their 30-year-old home had a deck, but they rarely used it. “We didn’t make good use of the existing deck because the sun beat down on it all afternoon,” Joann says. So she decided to build a screened-in porch primarily as a space for entertaining.

Building Out of the Box

The screened-in porch was designed to have ample space and convenience for entertaining. The old deck was 13 by 28 feet; the new porch is 16 by 28 feet with an additional 8- by 10-foot outdoor deck for grilling. You can enter it from the kitchen and family room.

“We wanted the porch to look like part of the house,” Joann says. “So we did the roofline and hardy plank siding on the outside of the porch to match the house. My pet peeve is when something looks added on.”

They knocked down the existing deck, which wasn’t built well, and started from scratch. “Since we were knocking down what we had, we decided to make it a lot bigger,” Joann says. “The design was based around entertaining, so we wanted an eating area, an area for comfortable seating and a long wall as a bar and serving area.”

The building materials included pressure-treated wood for the decking and vinyl siding for the outside. The ceiling was constructed with beadboard and a 1- by 6-foot trim to look like beams. Adding the trim to the top and painting the molding black gave the room an unusual design detail. “I didn’t want a white French door. People ignore doors. I painted the door, window frames and all the trim black. It frames the door and makes you want to go in the room.”

The inside wood underneath the screens is yellow pine in a tongue-and-groove design. It is chair-rail height and provides a child-safe wall. The screens were installed so that they could be maintained from the inside. (“This was a great idea since it doesn’t require going up a ladder,” Joann says). “Now it is a space we can use nine months out of the year, and it has been a great extension to the living space of our home,” she says.

Joann used an eclectic approach to furnishing the room by mixing old and new pieces, and decided on a black, white and green color palette. “I always love combining black and white with a pop of color; it’s classic,” Joann says. “Seventy percent of my rooms are black and white, so I carried that color palette outdoors. It looks crisp.”

“Lighting is one of the most important elements of room design—even outside,” Joann says. “Most rooms haves sub-par lighting. I wanted it to be bright in the evenings, so I put eight recessed LED can lights on a dimmer and installed an outdoor wall fixture.”

The decorative highlight for Joann is an antique sideboard she previously had in the family room that she repurposed as a bar serving piece for the screened-in porch. “The size was great, and it was a charming little piece that lent itself to the look I had on the porch. Now it stores barware and napkins, and I put a lemonade and barware display on top of it.”

Joann used all-weather wicker on the chairs and Sunbrella fabrics on the sofa, chairs, pillows and window treatments to stand up to the outdoor elements. She had the window treatments lined with Sunbrella fabrics as well. Joann wanted “something a little unique” for the ceiling fans, so she put sailcloth on the blades. The porch’s indoor/outdoor rugs can be hosed down. They have a soft weave, so they look like indoor rugs but are made for outdoors, she says.

Metal, glass and bamboo tables are organic elements that Joann added to the room. She uses tiebacks on the window treatments during the day to enjoy the breeze and view of the trees; at night she closes them for a cozy, glam feel.

“We have a beautiful, private backyard with a lot of trees, so it’s like sitting in a tree house,” she says. “It’s a great place to hang out. I like to have my Sunday-morning coffee while reading there, and it’s a perfect space for entertaining. I love listening to the sounds of nature: the birds, the wind. I can hear my neighbor’s wind chimes and the sound of the lawnmowers. It feels like the weekend even when I’m out there during the week.”