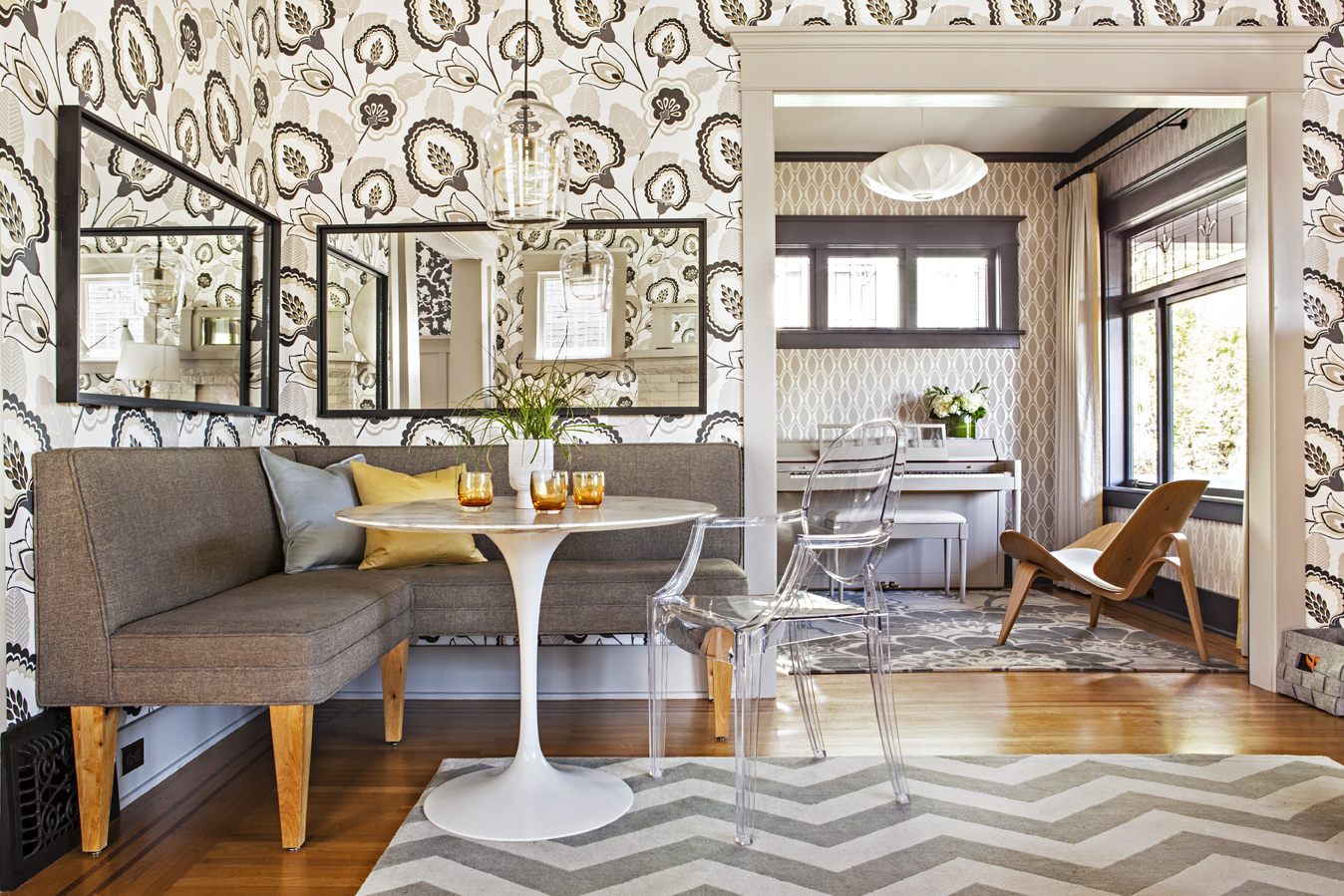 How do you respect the period style of your historic home while adding your favorite modern design elements to it? As this project illustrates, there are creative ways you can honor history and just reinvent it a bit.

Matthew C. Brenner of Matthew Craig Interiors was faced with the challenge of incorporating midcentury-modern furnishings into a 1920s Craftsman bungalow. It turned out to be a dream project not only for the homeowner but for the interior designer as well.

When Brenner arrived at the Seattle, Washington, bungalow, the façade was painted a pale green, and the homeowner was open to a new color. Brenner researched historic palettes and transferred the colors to a modern, contemporary design.

“The Craftsman palette comes from the earth, so I picked a very dark gray, earthy color. It set the tone for the rest of the house,” he says.

In fact, gray became the predominant color throughout the interior, from the wallpaper to the area rugs to the furnishings. Even the living room’s fireplace received a wash of light gray in a color Brenner calls “graige” (a mix of gray and beige).

The designer’s most unexpected and creative use of the monochromatic color was his decision to paint the family’s piano.

He convinced the owner to move the piano to the basement because its original oak color didn’t match the room. After some time passed, the owner wanted the piano back upstairs because of its entertainment value.

“I said, ‘Ok, but we have to paint it.’ I researched how to paint a piano; I called a piano store to find out how to paint one,” Brenner says. “When I asked about what kind of paint to use, they told me auto paint. Sherwin-Williams makes the auto paint, which is not sold in stores. I stuck with a monochromatic color that was closest to the wallpaper in the room, a blend of gray, tan and cream. It was a $6,000 job, but it was worth it.”

A traditional theme found in Craftsman homes is the concept of bringing nature indoors. Brenner used nature as his muse by adding accent pieces such as a Saarinen “Tulip” table, a Hans Wegner chair in a shell design and gray floral draperies in the master bedroom. Planters filled with greenery bring the garden ambiance to life.

Brenner looks back at the redesign with pride. “I think it achieves what the Craftsman builders had intended: the aesthetics of Craftsman design with a modern edge,” he says.

Matthew C. Brenner shares his tips for achieving a monochromatic, midcentury-modern style in your home.

The full version of this article appeared on pages 68-79 of the April/May 2015 issue of Cottages & Bungalows (Vol. 9, Issue 2) with the title “Singular Style.”

How to Recreate a Historic Kitchen