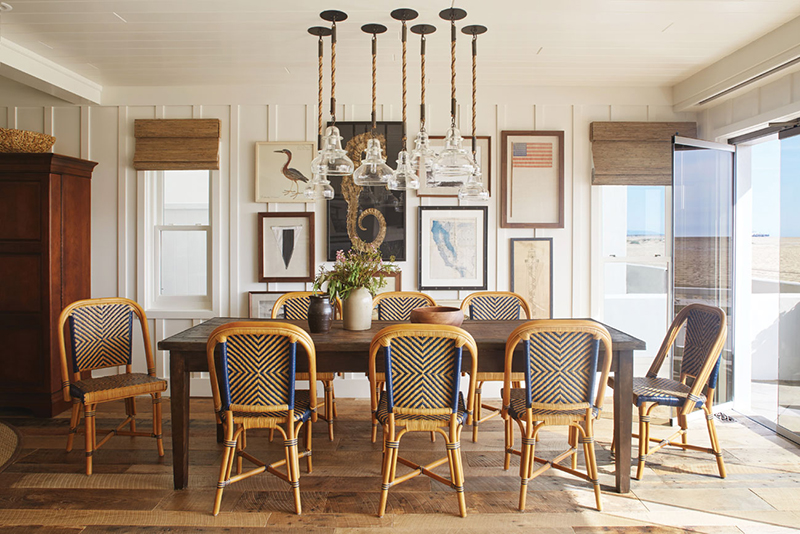 House Tour: A Seaside Renovation with an Antique Touch

How do you warm up a space while using a classic coastal palette of cool colors? When designer Brittany Stiles came on to help renovate a vacation cottage on Balboa Island in Newport Beach, California, coastal warmth was the name of the game. “[The homeowners] still wanted it to be coastal, but they wanted to make it cozy,” she says.

“Keep things simple in design and form, but then layer them on top of each other,” Brittany says. “Not everything has to be a showstopper.”

The first place to start was with functionality. The family had used the beach-front property for eight years as a secondary vacation home, and the layout just wasn’t working. “The kitchen was shoved back into the back of the house,” Brittany says. “The way the furniture was laid out in relation to the fireplace and TV didn’t make sense. The sofa was really far away from the fireplace.” Because Balboa Island is such a coveted real estate hotspot, the houses are small and don’t have much yard space. “The houses are close to each other, so we had to make the best use of the space we could,” Brittany says.

Without increasing the building’s footprint, Brittany rearranged the kitchen so it was open to the rest of the living area. “The kitchen had a peninsula, and we took that out and put an island where the wall was,” she says. She also sectioned off the dining and living areas so that even within the large room, the two quarters felt separated. “The changes were mostly to make it more functional,” Brittany says. “We had to be really efficient with furniture placement.” Because of the long, narrow shape of the room, it was easy for the furniture to get in the way of traffic flow. But Brittany circumvented this problem by moving the dining table and chairs next to the sofa instead of behind it by the stairs, where they had been originally. “That left a little space in the corner, so we made a reading area.”

When it came to the décor, the family wanted to stick with the coastal theme they already had, but warm up the space. “I don’t think they would have thought that blue and white would make the house warm because that’s what it was before,” Brittany says. But it’s all about picking the right shade. “I sail with my dad, and my favorite boats are the ones with antique navy blue,” Brittany says. “It has a little bit of gray in it, so it’s not too in-your-face.” The subtle hue brings in the coastal element but allows other classic pieces of the house to shine, such as the wood paneling they added to the walls and ceiling, as well as the new reclaimed wood floor.

“For me, the blue was important to bring in the coastal element, but it was mostly about the layering of the textures and materials.”

The family also didn’t want the décor to be too trendy. “They wanted a more authentic beach house aesthetic,” Brittany says.

“I tried to keep the more permanent things in the house classic, traditional and simple.”

From the antique prints on the wall to the tongue-and-groove ceilings and traditional tile in the bathrooms, the house is truly an antique beach house dream come true.

5 Ways to Channel Earthy Energy in Your Home