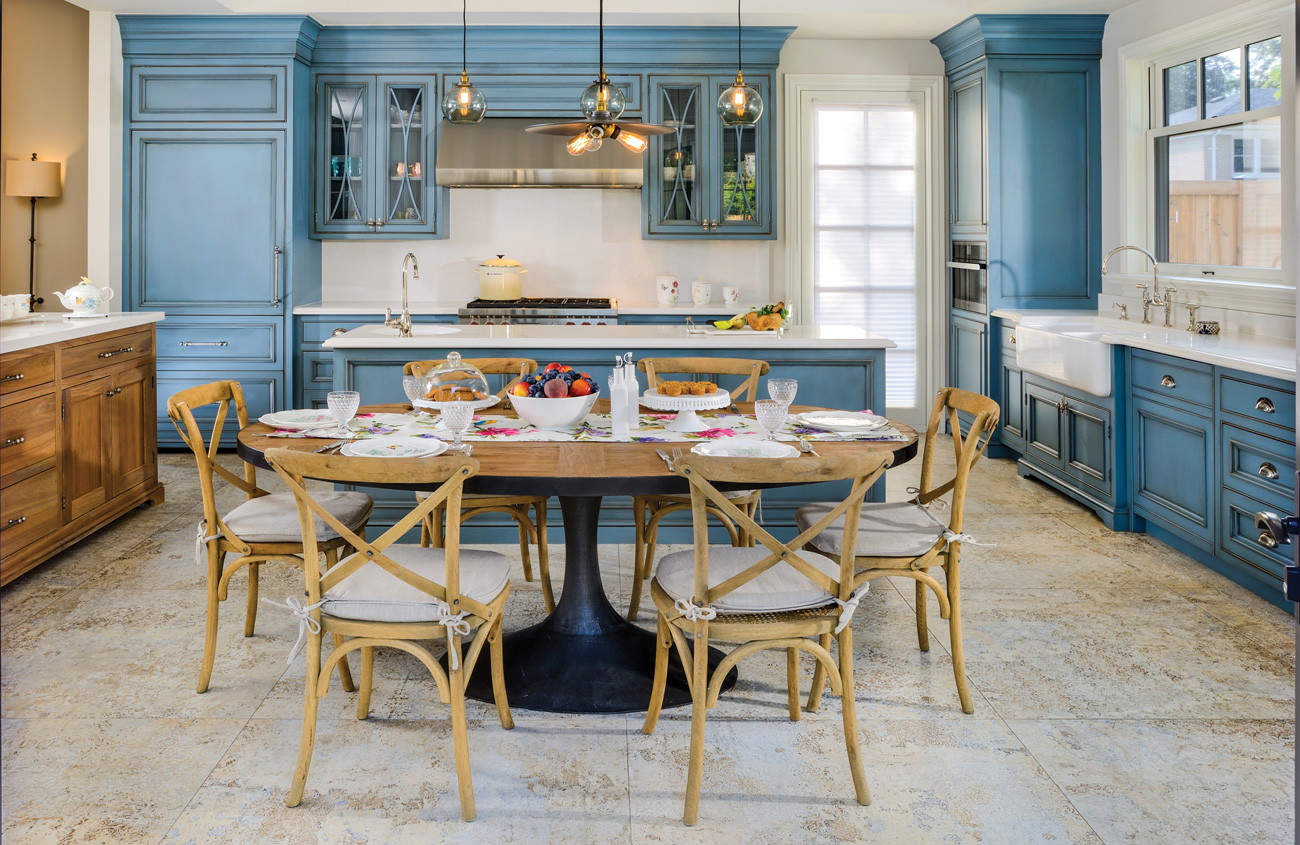 What if you had to build your home within city guidelines but still wanted the cozy and comfortable vibe of a cottage in the country? That’s what builder and designer Nikki Mobini of Upside Development did with her custom-built Toronto farm cottage.

“What really brought in the country charm is the tile and floor design.”

Starting with a one-story, 2,163-square-foot bungalow, Nikki decided to create a new place for her family to call home. The end product would be a two-story, 4,300-square-foot, custom-built Toronto farm cottage that combines modern utility and country charm.

The project started as a retrospect with the city of Richmond Hills. “Because of the zoning requirements, we were tied to a bit of square footage,” Nikki says. Even though the home’s footprint was constrained, Nikki still saw it as an opportunity to create a great space. Using the city’s guidelines, following the original home’s outline and inspired by the original floor plan, Nikki and her husband worked with what they had.

To get the design concept they wanted, the couple brought in different aesthetics and pieces for the interiors. “My favorites became the roadmaps of the house,” Nikki says. Using her favorite pieces and for that extra country charm, Nikki went in a different design and construction direction from her other projects. Normally, her firm does contemporary and modern design, but she decided to stick with a traditional country home—with some modern twists. The design concept plays with light from all angles, but also has structure and functionality as integral parts of the structure.

Nikki made this house her own in an inviting way that imparts elegance, comfort and ease. Whether it was with extra illumination, an open kitchen or whimsical designs, the house has unique features that create a cozy, yet functional, ambience.

Lighting was a significant factor in the design. Nikki wanted to add illumination for a purpose. “For me, mood lighting is very important,” she says. Every lighting fixture, pendant and chandelier was put in place for a reason, whether to draw attention to the wood kitchen island, create a lighthearted mood, add accents to the bathroom or make her living room shine.

Along with lighting, other unique aspects of the home are the coffered ceilings in the kitchen. “The ceiling was a last-minute addition,” Nikki says. The coffered ceiling merges the inside of the house with the outside by adding dimension and depth to the space with that extra country element Nikki wanted. The guest areas and hallways also feature wainscoting, adding an elegant and sophisticated element.

With changes in construction came changes to traditional design concepts. “We broke some norms,” Nikki says. The open kitchen concept is a prime example. Traditional cottages were made with separate seating areas: a family/dining area and a just-for-guests area. Nikki and her husband wanted to collapse and combine the two areas to create one large, inviting space for their family and visitors. The open kitchen still maintains its prime location for cooking and entertaining. It’s also the furthest point of the central space. “Although it was an open kitchen concept, the kitchen is still tucked away and gives privacy,” Nikki says. Changes in construction, architectural style and design ultimately contributed to the new home’s appeal and let the interiors take the stage. This allowed for Nikki’s country style to shine through the modern construction.

Combining country charm with a functional design, Nikki Mobini created a Toronto farm cottage that reflects her experience in the field as well as her own individual design style.

Love this style? Check out our special, Cottage Country, which is on sale now!

This Screened-In Porch is the Entertaining Space of Your Dreams