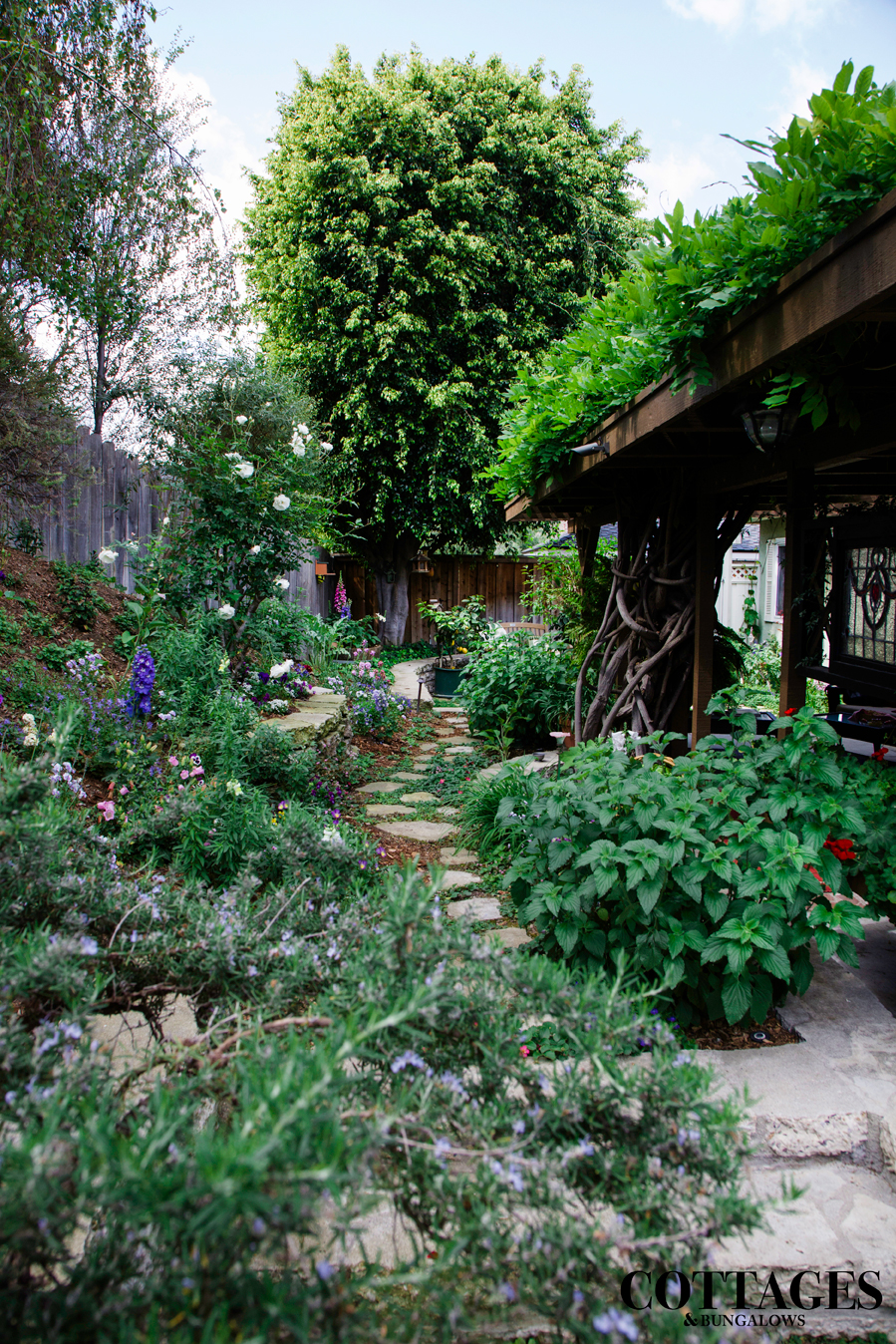 Designing Your Own Secret Garden

When you turn a dream into reality, you’ll have to work with limitations. Southern California is the land of the palm tree and poppy. But when her Brea, California client, Anne Jones wanted a traditional English cottage garden with lots of green, creeping vines and bright patches of colorful flowers, designer Kathryn Rue was up to the challenge.

Anne wanted an English cottage garden, but Kathryn had to work within the limits of the space. The narrow backyard faces a slope, which made the ground level feel tight. “The face of the slope dominated the view from the house and made the backyard seem very small,” Kathryn says.

Though small spaces can be a challenge, there’s always a way to make them feel cozy instead of claustrophobic. “We pulled out a portion of the slope to create a raised pathway between the existing patio and slope.” Surrounded by bushy greens, the path feels magical. “It united the entire backyard in a way that also created a sense of depth and space.”

Kathryn wanted to incorporate the slope into the garden, but didn’t want it to become the yard’s main feature. The solution was a retaining wall with rip-rap facing, which is a material made from chunks of old concrete. Kathryn tracked down a construction project and was able to salvage some of the unwanted concrete.

She used this material for the wall. “The rip-rap gives the backyard an aged looked beyond the actual life of the garden,” Kathryn says. “It also creates the framework of the English Garden look.” This clever trick of the eye is part of the reason why the garden feels like it belongs to a vintage cottage, not a track home in the suburbs.

The addition of the slope allowed for extra planting space. Kathryn added several birch trees (Betula spp.) to stabilize the hill and filled in the gaps with smaller plants. Now the slope continues the feel of the garden and makes the yard seem larger.

Originally, the south-facing backyard baked all day in the sun. This kind of area is perfect for a cottage garden, which features lots of color. Most of the bright flowers we think of as English cottage plants—daisies, cosmos, verbenas, zinnias—are annuals that need full sun and grow in open meadows throughout England.

However, Kathryn had planted additional birch trees on the yard’s slope, which made the garden shady. This made the quintessential colorful annuals a challenge.

As a result, Kathryn had to be strategic about how she captured color. There are still some lingering sun patches, so she used these to cram in flowers that need sun.

Kathryn then sprinkled the shady areas with hardy flowers that can take some shade, such as foxgloves (Digitalis spp.) and larkspurs (Delphinium spp.). “The highest priority has always been to incorporate as many perennials and annuals as possible,” Kathryn says. “So we selected plants that take part sun and part shade.”

The mix of annuals and perennials is a smart way to be efficient and save a little money on maintenance. Annual plants give the most color, but they die off and need to be replanted every year. Perennials last multiple seasons, but don’t have as much color. By mixing the two kinds of plants, Kathryn ensured that the garden would be long lasting but still show off vibrant blooms.

When you’re in the middle of a remodel or redesign, you might have to make hard decisions that will have a positive effect on the space.

“There was a mature fig tree in a key spot that needed to be removed to achieve the overall goals of this project,” Kathryn says.

It’s not an easy decision to take out a mature tree in your yard, especially if you have fond memories attached to the space. The fig tree dominated the narrow space, and it would have been impossible to make the area feel open and large if it stayed. “It was an emotional decision, but then the design possibilities could be realized,” Kathryn says.

Once the fig tree was out of the picture, Kathryn was able to include an open garden patio area in the yard, which wasn’t possible before. She also used the opportunity to create a sanctuary for her client’s favorite creatures.

“We incorporated the Ficus benjamina tree into the new design due to the client’s love of the birds who favor that tree,” she says. The change, though rough to make, was the best choice for the space, and the result is stunning.

The new, smaller tree also offered the homeowner the chance to include small homey details, such as an acorn birdhouse she acquired in Amish country. Other personal touches, such as hand-painted signs, welcome visitors and contribute to that overall cottage garden feel.

At the end of the day, the cottage garden is about infusing your personality into the space. “Have fun, experiment and add your own personal touches,” Kathryn says. “That’s what it’s all about with this style of design—to have fun in the garden!”

How to be a Good Host