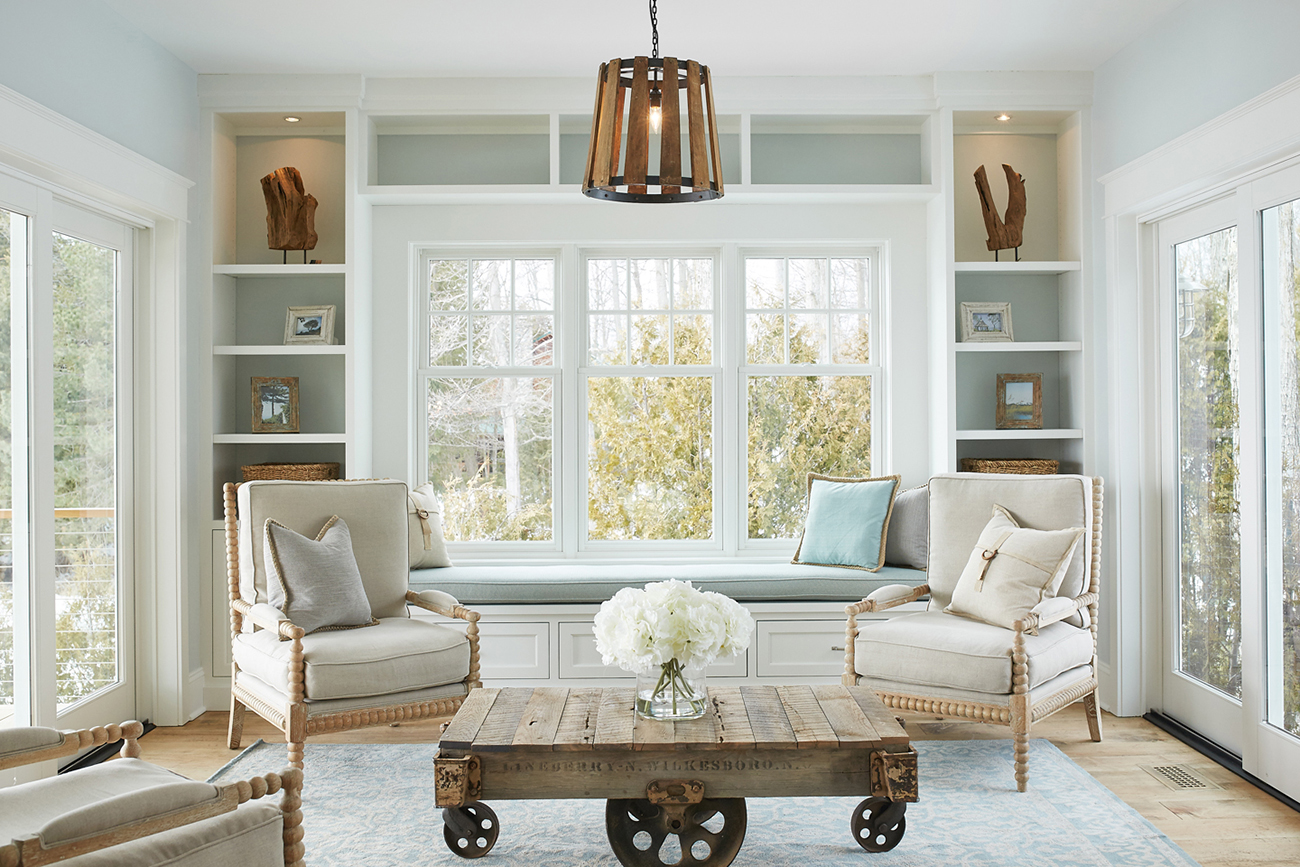 Total
18K
Shares
1
0
18K
Forget everything you know about rustic and nautical style because the Michigan cottage on Lake Charlevoix breaks every design stereotype, making it a unique oasis of cozy style. Inspired by the getaway cottage that homeowner Trudy Haugan had grown up going to, Trudy and her husband Bob envisioned this home as a special place for yearly visits with their four teenage children. The cozy lake house cottage was built from scratch just two lots down from the family cottage Trudy vacationed in as a child. For its design, layout and styling, they turned to interior designer Amy Darooge, of Villa Décor.

Amy embraced the couple’s rustic and nautical aesthetics, interpreting them with an airy aplomb that takes on a warm, mug-in-your-hand feel for fall.

The living room is a stunning yet cozy space. High ceilings that give it a lofty feel and the room’s dimensions and picture windows are all perfect for the custom window seat and built-ins on either side. “You can nestle in with a book but also enjoy the million-dollar view,” Amy explains. And while guests appreciate all those elements, it’s the magnificent Restoration Hardware antler chandelier that commands the room. “The chandelier was a happy medium between rustic and bringing nature into the space,” Amy says.

Its composition feels distinctly country and, during the fall, inspires thoughts of the woods, while its bleached hue is unexpectedly light and beachy.

Amy executed a similar feel underfoot with layered rugs and a custom coffee table. In order to balance the room’s colors, she placed a sisal rug on the floor and positioned a silky soft cowhide on top. Then she added the coffee table, which had been custom designed to look like driftwood, artfully blending the nautical and rustic themes. During the fall, the fireplace draws the Haugan family in for quality time and warmth.

A Kitchen for Fall

The kitchen is another key feature of the cottage, particularly since it’s linked to the other living spaces, opening up to the great room, dining room and sunroom. “The homeowners love to entertain and wanted all the spaces to feel connected and to allow for overflow into each space,” Amy says.
By swathing the kitchen in the same paint as the adjoining areas, the spaces “flow naturally from one room to the other and also feel larger and airier,” Amy explains, “and, by using the lighter cooler palette, it also forces the connection between the outdoors and indoors.”
In keeping with the soft feel, the kitchen cabinets were painted Benjamin Moore Super White while the walls were painted Bright White. The two hues combine to create a soothing yet chic environment and tie in perfectly with the glossy sheen of the Calcutta marble backsplash and countertops. “Both Trudy and I love the feel and look of real marble,” Amy says.

Other styling decisions, like the more rustic influence embodied in the sliding wood barn door, naturally stained bookcases and leather armchairs, make the room a great place to cuddle up while the leaves change outside.

With Trudy’s knack for cooking, marble countertops were a no-brainer as marble holds cooler temperatures, something that comes in handy when she rolls out cookie dough for instance. She also loves the character and imperfections that come with marble as it ages through the years. Other features, like a large cook top, double ovens, two fridges/freezers and a 50-inch triple sink, were installed specifically for Trudy. Barstools, placed against the counters, delineate the areas between the kitchen and the other rooms and allow curious observers to sit with mugs of cider and watch her in action.

The priorities for the family room were simple and heartfelt: create a place where the family could hang out, even during the chiller months. “The natural slate floor is heated, so it’s always nicely toasty,” Amy says.
Amy installed an all-ages bar against the wall, complete with a microwave and glassware storage. “The kids can pop popcorn and the adults can have drinks when they are hanging out,” she explains. Add in the crackling fireplace and television, and the room serves as a hangout hub for the whole family. Amy loves the fact that there is a sizeable built-in where photos can be displayed surrounding the family with cherished memories while they create new ones. It mirrors the built-ins in the great room and incorporates the same philosophy:

We feel that built-ins are places for storing or displaying cottage memories. I love going into old cottages and looking at what history is being displayed with a built-in shelf.

While cottages can typically invoke thoughts of summer, this version of rustic elegance meets beachy chic proves that a little imagination can result in something magical: an all-seasons cottage that wears fall as well as it does summer.
Total
18K
Shares
Share 1
Tweet 0
Pin it 18K